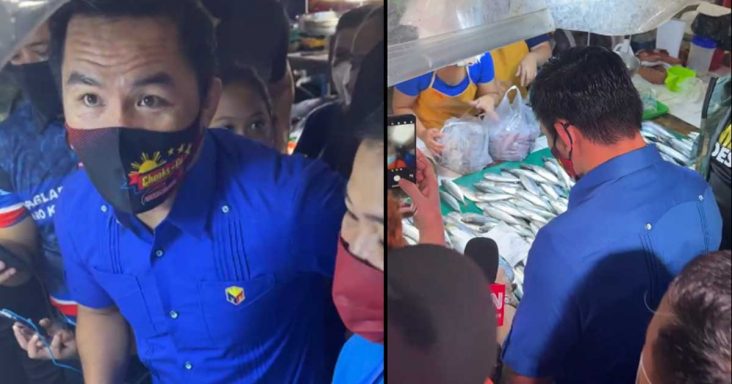 It was like a teleserye scene that happened during the visit of Sen. Manny Pacquiao at a market in Makati City, the morning of November 17, 2021.

Market vendors immediately surrounded the “Pambansang Kamao” after knowing he bought fish, meat, and vegetables in bulk at the Guadalupe Public Market in Makati City, with some of his security staff, based on a video posted on the senator’s official Facebook and Instagram page.

As seen in the video, Pacman bought wholesale fish, vegetables, and meat from a lucky seller in the market, amounting to 1700 pesos.

Instead of paying the exact amount, Pacman handed 3,000 pesos to the vendor, who felt she won a jackpot with so much excitement.

In addition, the senator gave a bonus of 1,000 pesos to all the vendors where he also bought.

In another part of the video, a woman spoke and praised Pacquiao. He said, “Para maiba naman, Manny Pacquiao for President! Maka-Diyos! Makatao! Salamat po!”

Meanwhile, viewers who watched the senator’s IG and FB Live videos have various reactions. Some have questioned if Pacman engaged in vote-buying because he intends to run for the presidency in the May 2022 elections.

However, some netizens defended him, saying that he did not commit bribery but instead helped and cared for others because he used his own money.

Sen. Pacquiao’s camp has yet to issue an official remark on the matter.