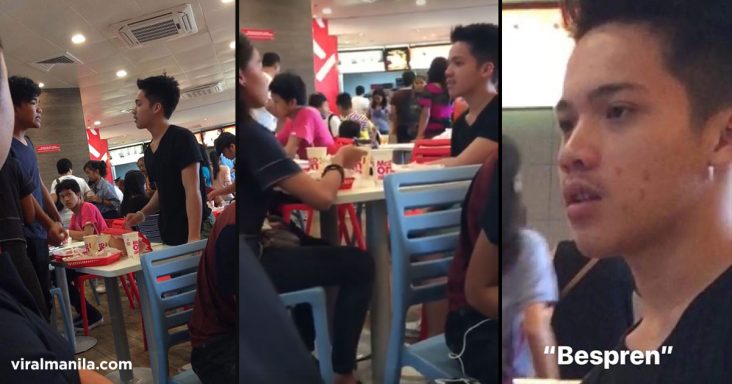 A set of videos of an angry guy arguing with his girlfriend in a fast food restaurant in SM City Puerto Princesa was an instant viral today.

The guy lose his temper when his girlfriend brought her male best friend on their date. He suspects that there’s going on with his girlfriend and the best friend. The videos looked like secretly recorded by someone from another table.

But the viral Facebook posts are just for social experiment project. Ria Angelika Gonzaga, the one who originally uploaded the videos revealed on her Facebook account.

“I am the one who uploaded this video. To everyone who watched this video I would like to inform all of you that this video is only a social experiment project for our Personality Development subject. All of this is not real, trust me. I’m not lying guys. Hindi talaga. We didn’t expect that this video will get this viral. To the point na sobrang daming views and shares.”

She cleared that the three convincing actors in the videos where her classmates and not in a romantic relationship. She apologizes for the misunderstanding to those who think that the incident in the video was true (but it is not).

“Yung three actors na nagaway they are all my classmates and from the same group. They are not in a relationship. Acting lang yun guys. I am sincerely saying sorry in behalf of everyone involved in this video especially si Kuyang Naka Pink(kuya sorry) sobrang epic kasi nung reaction di ko mapigilan sarili ko. Sorry everyone for the misunderstanding.”

The social experiment was created to see the people’s reaction when they see such scenario of a scandalous argument of a couple in a public place e.g. fast food restaurant. She also wants to inform those who re-uploaded the videos.

“It was only filmed to see the reaction of you the people that will see this. Thank you, po. And dun nga po pala sa mga nag re-upload ng video na to, without my permission, well please inform them too. Pasensya na po. It was a successful experiment, indeed.”

You can watch the said social experiment videos below: